An article about IROKO published in LDV Magazine. 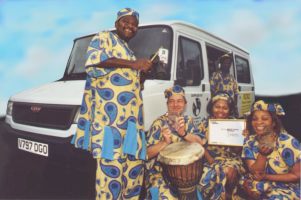 An award-winning theatre company that specialises in traditional African storytelling, music and dance has been boosting the confidence of children throughout Britain with the help of an LDV minibus.

"Winter term is coming to a close in Barking, East London as 90 children sit cross-legged and transfixed in the assembly hall of Northbury Junior School. In front of them are five figures clad in colourful blue and yellow African dress, bearing traditional African drums and percussion instruments. One stands up and puts a comforting arm around a little boy standing nervously at one side.. and encourages him to play God.

It is a class for characterisation of the highest order, for we are at the start of a story that is being enacted and improvised by the school's seven to eight-year-olds.

The boy, who is being asked to play Nyame, the sky god, booms out with growing confidence a call to the lower gods in the room for advice on what should be done about the wars poverty and starvation afflicting earth. "Fight fire with fire" and "leave them to it" are some of the responses the children shout out until Nyame's helper, Ananse the spider, reminds Nyame of how he was driven away from earth by Man who had set the world on fire. With a majestic flourish, Nyame sends Ananse back to earth to announce that he would be sending a saviour and that the people should prepare for his arrival.

It is the cue for the five performers to drum out African rhythms as the children jump up and sing a jubilant African chorus. As the story becomes even more familiar, the excited youngsters dance and sing in various African languages to celebrate the arrival of baby Yesu. 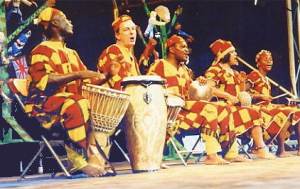 The creators of this African version of the Christmas story are members of London's IROKO Theatre Company which uses traditional African theatre art to enhance the self-confidence and knowledge of children and young people, including those with special needs.

IROKO - the name stands for the strong African tree that provides the wood for the company's masks - was founded in 1996 by Nigerian-born Alex Oma-Pius. "From working as a theatre-in-education volunteer, I discovered that many schoolchildren knew little about other cultures, especially African culture" he said. "Those with African parentage especially were showing an apathy, borne out of ignorance, that was blocking their self-esteem."

Alex founded IROKO Theatre Company in 1995 to redress this problem. But IROKO is not just aimed at black children - it provides a range of activities for all races in schools, youth centres, hospitals and young offenders' institutions across Britain. Throughout 2001, the company worked with some 90,000 children and young people, through oral storytelling, music and drama workshops. As well as learning about African culture, the sessions have a wider role in promoting team work and racial harmony.

Today's work is part of a three-day workshop residency resulting in every child having a role to play in a one-hour school performance of the nativity, viewed from an African perspective. As well as being able to express themselves through drama, dance and music, children in IROKO workshops get to learn more about African through its musical instruments and hearing traditional folk tales.

The company also conducts in-service training or teaching. This involves demonstrating its work to teachers, followed by a workshop that focusses on the role of storytelling in helping children develop their imagination, listening and communication skills. Early years teachers are also introduced to basic counting chants and musical games and movements that enhance numeracy.

IROKO is also producing a pack to help teachers put into practice the lessons they have learned, with the funding coming from a £5,000 Guardian Charity Award the company received last year in recognition of its outstanding work as a social welfare charity. The award came on top of winning the NatWest Community Involvement Award.

IROKO now has five core performers, employed on a freelance basis and an administrator, Carol Edozie, whose post is funded by a grant from BBC Children in Need.

Its award-winning success has seen demand for residencies and in-depth workshops escalate over the past year. Funding from the Baring Foundation and the Association of London Government has enabled IROKO to conduct residencies in Hertfordshire, Bedfordshire and outer London, and a grant from Yorkshire Arts has seen IROKO's work extend as far north as Leeds.

"The extra miles have brought the need for better transport. Until two years ago, we only had the use of a single car, which was very limiting. If a school wanted a music workshop, we just couldn't offer it unless it could provide its own instruments, said Alex. Fortunately funding from the Foundation for Sport and the Arts enabled IROKO to invest in a 13-seat LDV Minibus.

IROKO Theatre Company is seeking to recruit two volunteer researchers to assist with our âStories of Africans Living in Newhamâ project.

The Speaking Without Voice Resource Pack is here!!

Informative, educational and insightful Resource Pack that will inspire you to learn more about Nigerian nonverbal communication systems and those from around the world. FREE DOWNLOAD!

On July 20th 29 excited members of the community travelled up to Liverpool, to see the Igbo Compound within the International Slavery Museum. The recreated family compound is decorated with Uli designs, commissioned from local artists!