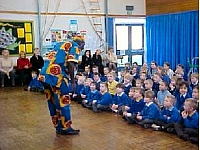 A project to explore the Oral history behind the artefacts in the British Museum's Sainsbury's African Gallery.

IROKO Heritage Africana Project was designed to facilitate access to, and sustain interest in African heritage and cultures and introduced participants to the rich oral traditions, visual arts, music and dance of the African continent.

The project enabled IROKO to conduct research on African folklores and languages - riddles, adages, proverbs, etc., and their manifestations in the visual art of Africa, particularly on the artefacts on display at the Sainsbury's African Gallery at The British Museum.

A storybook "Sho-Sho & The Villagers" and a Teaching Resource Pack was produced at the end of the project. The storybook was inspired by some of the artefacts at the museum and is available for purchase from IROKO.

London African Story enabled IROKO to take the outcome of its Heritage Africana project  to wider audiences in the London Boroughs of Redbridge and Waltham Forest. The project conducted research on African folklores and languages - riddles, adages, proverbs, etc., and their manifestations in the visual art of Africa, particularly on the artefacts on display at The British Museum.

Apart from taking volunteers and some members of the public on a guided tour of the Sainsbury African Gallery at The British Museum, workshop activities and performances were held at Mayfield School & College, Redbridge, Mayville Primary School, Leytonstone and also at the Vestry House Museum, Walthamstow. Exhibitions and display were also held at the following libraries:

Proverb of the month

"The horns cannot be too heavy for the head of the cow that must carry them."

A project that used fun and creative means to enhance the practical English speaking skills of refugees/new migrants in Newham London, was funded by Peoples Postcode Trust, a grant-giving charity funded entirely by players of Peoples Postcode Lottery.

The Magic of Rhythms

A family bonding project supported through funding from Peoples Health Trust using money raised by HealthLives through The Health Lottery.

Supported through funding from Aspers Good Causes Fund, provides opportunities for the development of skills of London Borough of Newham young people and their parents.

Opportunity for skills development and participation in fun and creative activities.

Discovering the history and contributions of Africans in and around Canning Town since the 1920's.

The Homage to Canning Town African Ancestors project explored the areas in and around Canning Town that have historical links with Africa.

Fun and Education For All The Family

The Forgotten Folks project was funded by Comic Relief. It incorporated fun workshops that used elements of African arts and culture to break down the social isolation and health problems usually faced by elderly people.

IYE AJA means Umbilical Cord in the Itsekiri language of Nigeria. This project, funded by Heritage Lottery Fund, aims to highlight and celebrate the ingenuity of Diaspora Africans in managing to retain an active commitment to their customs and values.